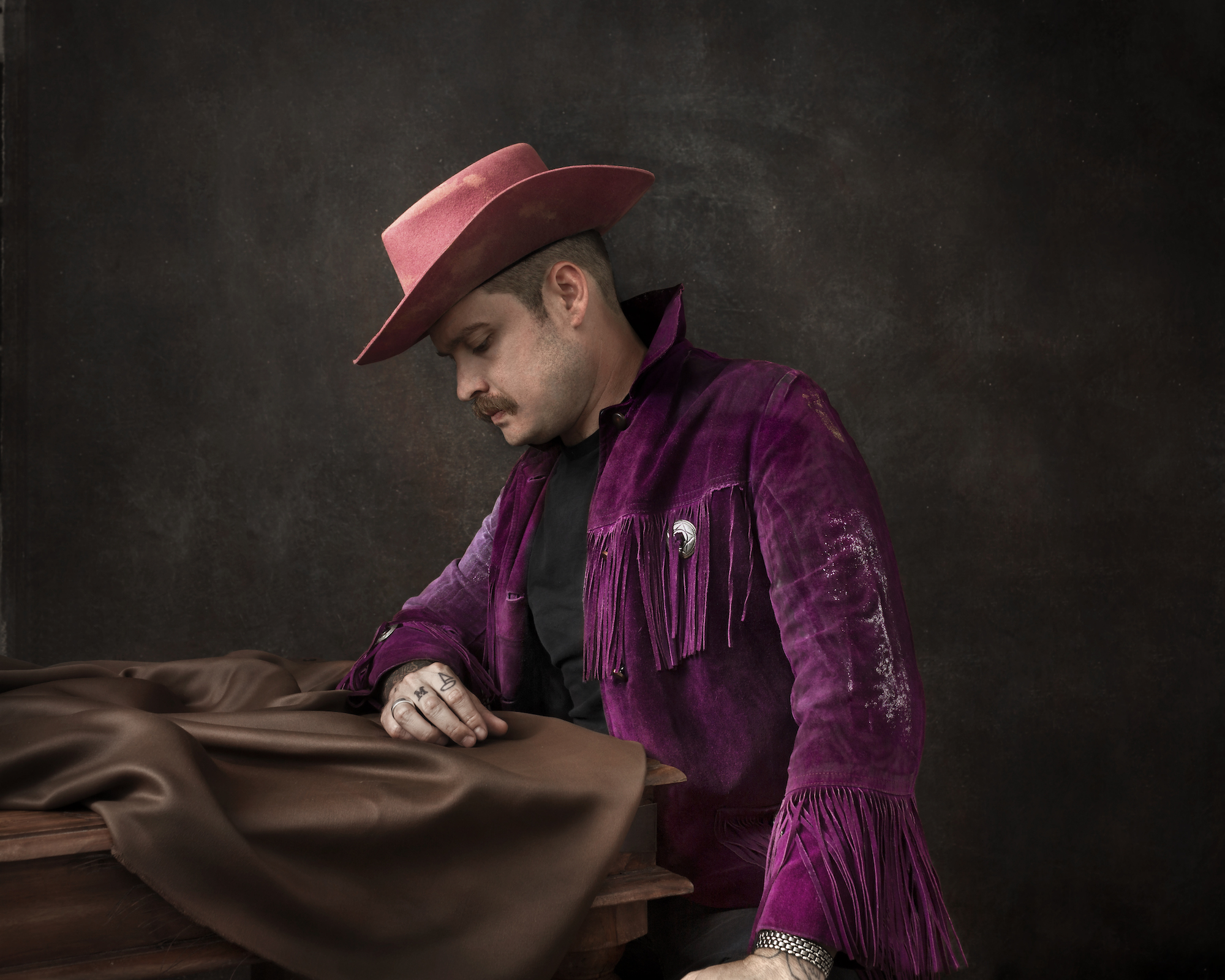 On The Winter of Our Discotheque, his first album in nearly a decade, Michael C. Duguay immerses listeners in his complex universe through work which is both familiar and inventive, equally whimsical and stone-cold stoic. The songs in this collection were composed over ten itinerant and disastrous years, in and about his life lived in hospital beds, shelters, and addiction treatment centres. This quasi-sophomore release finds Michael C. Duguay returned to wellness and rapturously reunited with his craft, writing with startling clarity and remarkable candor, withstanding the conventional singer-songwriter label. The Winter of Our Discotheque is a triumphant reemergence, establishing Michael C. Duguay as an idiosyncratic punk-poet whose mercurial work, while firmly rooted in the vernacular tradition, combines adroit pop and the avant-garde to ecstatic and often devastating effect.

On Summer Fights, a song which morphs from pastoral alt-country ballad to jubilant, psychedelic honky-tonk, Michael sings the album’s central thesis; ‘there’s a time and there’s a place for all variety of grace’. This declaration is one of many which draws attention to the beauty that surfaces, and which so often goes overlooked, in a world of chaos and struggle. Describing his time spent battling addiction and mental illness, which found him drifting from the gulf islands of British Columbia, to Halifax’s north end, to a halfway house west of Thunder Bay, Michael remarks, ‘I completely lost hold of my identity, and as my emotions and thinking became increasingly compromised by substances and trauma, my relationship with my practice dissolved; first my ability, then my desire to try’. Despite the hardship endured, in broken moments of lucidity Michael was able to shape new personal understandings of the varieties of human experience, and his own relationship to privilege. These revelations have resulted in a body of work which neither dwells in the darkness nor trivializes his own experience, but which describe in poetic, naturalistic, and sometimes droll language, the realities of his lived experience “I spent a lot of time in places that others might describe as ‘bottoms’, where I never predicted myself landing, and these songs have helped me make sense of those experiences’.  The narrative spun by The Winter of Our Discotheque is both bildungsroman and poioumenon (a work of art that tells the story of its own making). Revealing its own metfactions as it progresses, his writing draws comparisons to the literary school of Southern Ontario Gothic writers including Munro, Findley, and Urquhart.  The album draws its title from John Steinbeck’s final novel, which in turn references the opening words of Shakespeare’s Richaed III. More than just clever wordplay, the themes on Duguay’s record can be understood as contemporary expressions of both of those writer’s existential anxiety.

On the haunting and vertiginous Tithes, overtop of swirling reeds and reverberating electric piano, Michael sings ‘there’s no cause for your applause.’ First sketched in a hospital bed in Moncton in 2014, these words make clear that Michael is not writing to solicit sympathy and validation, or to abide by convention, but to devoutly recommence his work with a new, refined focus and an unshakeable joie de vivre. Musically, this outsider ethos is also present. Soaring brass parts are unexpectedly paired with layers of synth drones and percussion, and the arrangements feature billowing woodwinds and iridescent piano in lieu of guitar solos and other conventional indie-rock signifiers. Clocking in at just under an hour, the album’s eight songs are meticulous, and the genre-defying arrangements are palatial. Simply put, The Winter of Our Discotheque is an uniquely indulgent album, and audibly the work of an idiosyncratic artist skillfully working out a decade’s worth of pent up creativity. In Michael’s patient and thoughtful hands, this sort of indulgence is a virtue. While the album sonically references a wide spectrum of influence – post-rock, mid-nineties midwest emo, oblique Americana, and cinimetac psych-pop – an impressive clarity of aesthetic vision, supported by Michael’s distinct vocals and lyrical style, has resulted in a record that is both boldly obscure and remarkably cohesive.

Michael C. Duguay first surfaced in the Canadian music landscape as a collaborative multi-instrumentalist working with a number of a number of critically acclaimed projects, performing on breakthrough albums by Evening Hymns and The Burning Hell, and in east-coast supergroup Weird Lines (with Julie Doiron and Jon McKiel), among others. While touring the world and gaining a reputation primarily as a backing musician, Michael was covertly recognized in the Canadian music community as an enigmatic personality, fervent community organizer, and a gifted artist, songwriter, and poet whose busy touring schedule and reckless lifestyle often stood in the way of formally documenting his own work. In 2012, he self-released Heavy on the Glory, a collection of eight songs written and recorded between 2004 and 2010, produced by James Bunton (Donovan Woods, Ohbijou), and featuring over thirty contributing musicians. Recorded in the shared living space of the communal artist co-op that he inhabited in Peterborough, Ontario, the album showcased Duguay’s emerging knack for lucent storytelling and his penchant for thrilling compositions, entrenched in stalwart punk rock ethos and energy. Though considered by those in his circle to be a captivating documentation of Duguay’s conspicuous ability, Heavy on the Glory was never formally promoted or toured as Duguay’s health and personal life unraveled. Following a move to Sackville, New Brunswick after years of substance abuse and undiagnosed mental illness, Duguay suffered a series of mental breakdowns, eventually leading to institutionalization, poverty, and homelessness. From 2014 to 2018, Michael disappeared from the Canadian music scene completely.

In 2018, Michael resurfaced near Kingston, Ontario after sustained and determined efforts from his friends and family contributed to his return to health and stability. He compiled and completed his poetry and song-sketches from the preceding decade, and set out to record and produce a new album. With a revolving and diverse cast of friends including members of Evening Hymns, Pony Girl, Little Kid, Minotaurs, Alanna Gurr, Merival, the Two Minute Miracles, and Omhouse – his partner performs the trombone parts, and his 87 year old Grandfather also sings on the closing track – the album was produced out of heralded Canadian studios including Port William Sound, The House of Miracles, and Little Bullhorn. The result, two years later, is The Winter of our Discotheque; a fascinating and compelling collection of songs that offer a sobering insight into the mind of an artist deeply invested in the meticulous craft of honest songwriting. With storytelling rooted in genuine grit and hard-earned mettle, Michael has finally been given the chance to have his voice heard. On the album’s sprawling opening track, One Million More, a powerful eight-minute testimony of forgiveness, and a humble and compelling commitment to personal accountability, sobriety, and his craft, Michael sings, ‘‘I’ve heard the song remains the same; I think I’ll write one million more.’ With this proclamation, Michael C. Duguay announces the long-awaited arrival of his distinctive voice. The batch of uniquely thoughtful, compelling, and resonant songs that follow serve as a promise of what is destined to be a rich and prolific career for one of Canada’s finest and most formidable young songwriters.